This film is so sweet at heart that even though critics loved it and initial audiences enjoyed it, it might have left some comedy fans stunned and unsure how to handle its themes of kindness, camaraderie and honesty triumphing over all. Cynics might have been thinking as the house lights came up, "Whu-? I actually ended up LIKING Tim Allen as the egomaniacal Captain Kirk figure?" Yes, and let me tell you something, Tim Allen does a great job starring in this film. There, I wrote it. Well, he does. He makes a very credible arrogant, megalomaniac hero.

But don't disregard Galaxy Quest because of its family-friendliness and big hearted humanity. See it for the clever concept: a bunch of washed-up actors from the long-cancelled but beloved sci-fi television show, Galaxy Quest, are recruited by actual aliens who need their help, warding off evil crab-like intergalactic space thugs. The aliens (Thermians) have seen every episode of the series and mistaking it for a documentary, have modeled their entire society and technological know-how after the show. Hilarity really does ensue.

No? OK, see it for this man and this man only:

Alan Rickman as Alexander Dane—a frustrated, seething, bitter Shakespearean actor, forever forced to utter his half-alien character's ridiculous catch phrase ("By Grabthar's hammer...") while wearing a rubber reptilian cap on his head for the entire film. Perhaps the most perfectly cast character in all of drama since the dawn of time.

Still not convinced? Then see it for Sam Rockwell, a paranoid extra from the original TV series (Crew Member #6) who was killed off before the first commercial and is terrified of it happening for real once they get into space. Simply known as "Guy" to emphasize his expendable status.

OK, how about the Thermians, headed by Enrico Colantoni as Mathesar with his brilliant little sing-songy monotone voice? Fun game: see if you can find Dwight (Rainn Wilson) from "The Office" among the Thermians. He's pretty identifiable, which shows how alien-like Dwight is.

Tony Shalhoub as the most nonplussed character in film history, ship-engineer Fred Kwan. In one outtake, Rockwell demands, "Are you STONED?!" and he may very well be. He has the munchies during even the most dramatic moments.

Plus there's Sigourney Weaver playing a dumb-ish blonde whose only job on the original series was repeating back whatever the ship's computer said. She and adorable Thermian Missi Pyle are the only female characters of note. And except for Daryl Mitchell as the ship's pilot, there is nary a person of color in sight. I told you it was a knowledgeable tribute. You might recognize references to a certain 60s-era TV show, here, there, and everywhere.

And now, with plenty of visual spoilers (sorry about that), we present: 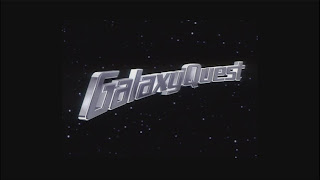 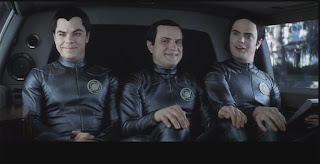 Email ThisBlogThis!Share to TwitterShare to FacebookShare to Pinterest
Labels: comedy jokes, the mooovies

Required viewing for all those who call me friend! You missed Justin Long of Mac commercial fame as the geeky teenage true believer too.

This film is riddled with talent.

Once again shows Rickman as the best supporting actor out there. He needs more starring roles. Unfortunately, Marquis de Sade didn't do it for him in Quills.

I was going to mention Justin (cute, geeky fan in the striped shirt, third to last photo) but I hate those Mac commercials so much. Note that his big scene in "Galaxy Quest" involves multiple PC applications--not a Mac in sight. So there! But yes, this was his first film.

i forgot about this film, has Jackson seen it?

Jackson hasn't graduated to feature films yet. They're a little too long and often too intense for him. He really likes half-hour cartoon formats the best. He did see me watching this in the living room the other day during the scene on the rock quarry planet and he said (and I quote), "What are you watching? I don't like it." Maybe in a couple of years...